New Discussion Forum: So that members stuck at home can continue to feel part of the SCBC bridge community, we have create a Discussion Forum. More details at right.
Activities while the Club is closed: The ABF and QBA have offered a list of suggestions on how members can stay connected with the bridge world while the Club is closed, including playing or watching bridge on BBO. More...
Latest Hand of the Week: Here is the latest hand of the Week, from our anonymous author Alchemist. It is "Cute Bidding" - click to open. Previous editions of Hand of the Week are on our Documents page.
President's newsflash: Latest newsflash here - 19 December 2019 More...
Link to Bridge Solver On-line: Our results now include an option to replay a hand using Bridge Solver Online. You can also use this page to enter and play any hand, and have it calculate the makeable contracts. The link appears next to the display of the hand record on the Board page.

New discussion forum: In these challenging times, people need to stay engaged within their community. That's not easy when most of us are not even leaving our homes.

We've therefore decided to use technology to help our members stay connected with each other, and have set up a Discussion Forum. It's a place where people can post comments about pretty much anything (within reason), and others can view and reply. It''s not limited to bridge - in fact as most of us aren't playing much bridge there will probably be very little about bridge - but rather it's about anything that you think others in the Sunshine Coast bridge community may be interested in.

The Forum will be just like having conversions with lots of people, while still observing social distancing.

Anyone can view posts, but you need to register in order to post new topics and reply to existing topics. Registration is open to members, but we're also opening it to the broader Sunshine Coast bridge community. To register, visit the Forum and click "Sign up" on the top right side. When you register, you'll be asked to create a user name and to enter your Club or ABF number. The Club / ABF number will remain private but helps us keep spammers and inappropriate posts off the forum. [posted Mon 30-Mar-20]

A recommendation has been made by the Australian Bridge Federation, and endorsed by the Qld Bridge Association, that all bridge clubs close for a period of 4 weeks from this Wednesday. The Club is following this advice, with the effect that all sessions, including Beginner's and Improvers' lessons, will be cancelled from this Wednesday 18 March 2020, for a period of 4 weeks. This also involves cancelling our Graded Teams congress on Sunday 22 March, and also our GNOT Heats scheduled for 4/5 April.

The ABF has advised: "The ABF recommends that Bridge Clubs be temporarily closed for four weeks as from Wednesday 18th March 2020 with the situation to be reviewed at the end of that period. A further extension may be imposed if necessary.

"Whilst it may be a difficult decision, health experts around the world are all in agreement that the best way to slow the transmission of the virus is for people to practise social distancing. Many other organisations are cancelling events that involve gatherings of people and we feel it is a duty of care to our extremely high-risk clientele and to afford the highest level of health and safety to the members, their families and the wider community."

Update: The ABF and QBA have assembled a list of suggestions on how members can stay connected with the bridge world while the Club is closed, including playing or watching bridge on BBO. See more... [posted Mon 16-Mar-20] 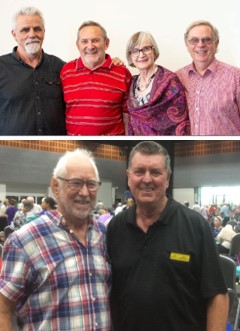 It was also great to see a few of our newer players playing in this international event, including Kim and Lesley Rouse, Sally Weedon - Janet Benstead, Linda Darnell - Wendy Gibberd, Julia Benfield - Phil O'Shea, Carmel Dwan - Heather McKelvie-Morris, and Betty Markkanan - Collette Anderson, all of whom played in either the Under 10 Masterpoints or Under 50 Masterpoints events. [posted Sat 29-Feb-20] 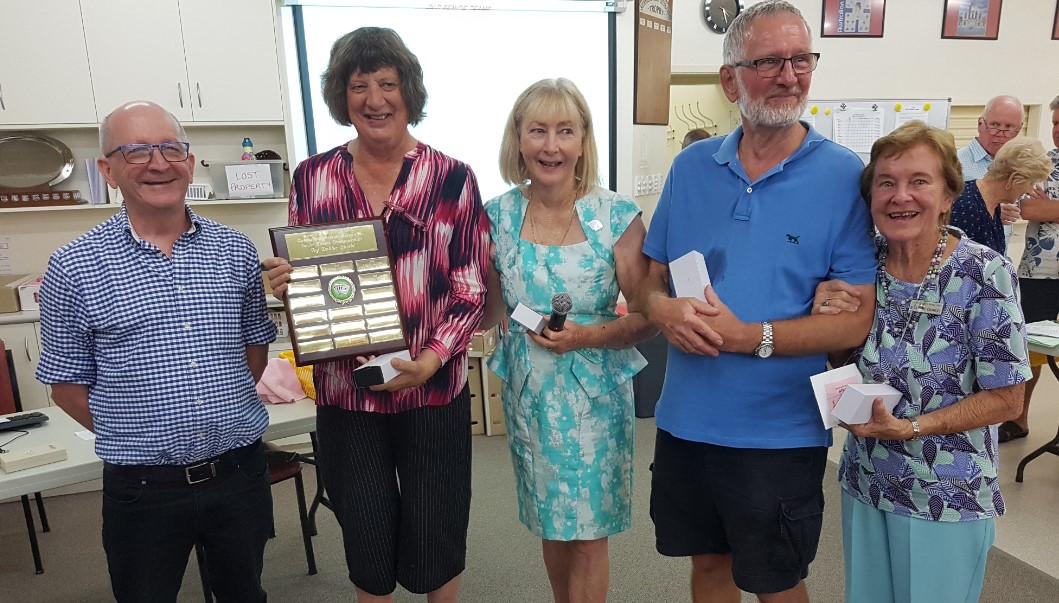 The 2020 Qld Senior Teams was hosted by our club on 1/2 February 2020. A total of 32 teams competed, including many from Brisbane and other areas.

The trophy was won by the Crowley team pictured (Liz Zeller, Alison Dawson, Richard Perry, Rosemary Crowley). The trophy was present to the winners by Richard Ward (pictured far left of photo, on behalf of the QBA. 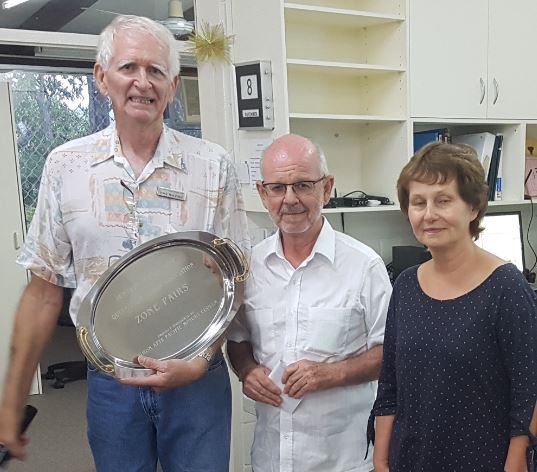 The Graded Zone Pairs was held on Sunday 8 December, with 58 pairs across 3 grades participating.

Grade A winners were Steve Brookes and Adrienne Kelly (pictured with convenor Tony Walford). The B Grade was won by Astrid Borchhardt / Kelly Barber and the C Grade by Mary James / Mike Scott.

Thanks to director Steve, caddies Heather and her assistants, kitchen helpers, and Tony as convenor. [posted Mon 9-Dec-19] 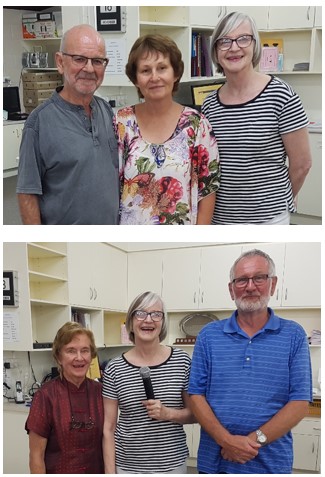 This event is scored on a handicap basis too, and handicap winners were Judith Slade - Dorothy Beil, and with with second place on handicap going to Gaye McAuliffe - Marion Bucens. See more... [posted Mon 18-Nov-19] 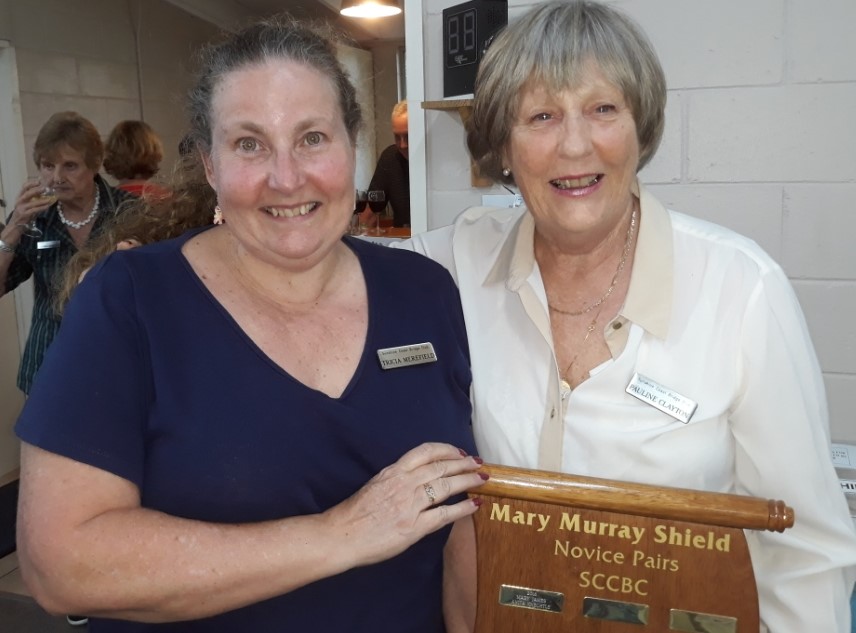 Our 2019 Novice Pairs Congress was held on 10 November with 32 pairs from all over south-east Queensland contending. Winners (pictured) were club members Trish Merefield and Pauline Clayton.

Many thanks to Steve as director, and the team of volunteers in the kitchen and bar. See more... [posted Mon 11-Nov-19] 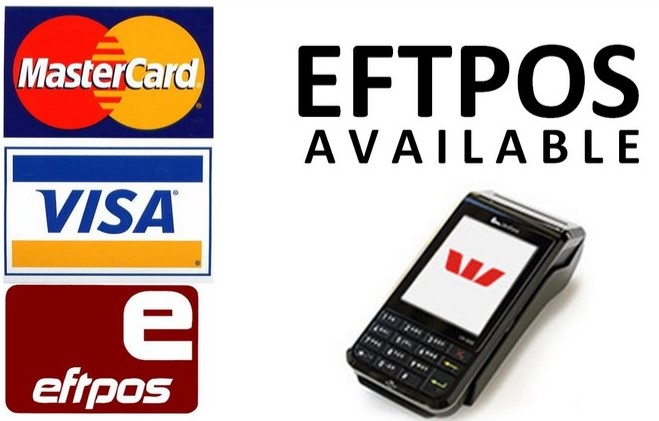 For the convenience of members the club has installed EFTPOS facilities. Initially the following rules will apply:

Only Mastercard and Visa debit and credit cards can be accepted

EFTPOS can be used only for membership and joining fees, the purchase of pre-paid game vouchers, entry fees for congresses, lesson course fees and purchase of books and lesson materials

A $10 minimum will apply 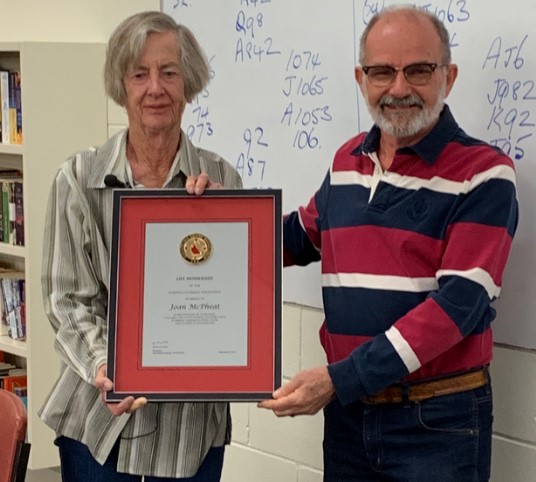 This month, Joan McPheat was awarded life membership of the Qld Bridge Association in recognition of her many years of work for bridge in Queensland. She joins Reg Busch and a handful of other giants of bridge in Queensland who have received this honour.

Joan has been a major force behind our Wednesday supervised play session and the development of new players, and this contributes significantly to the growth of our Club. She was awarded life membership of SCCBC in recognotion of this role in 2015. 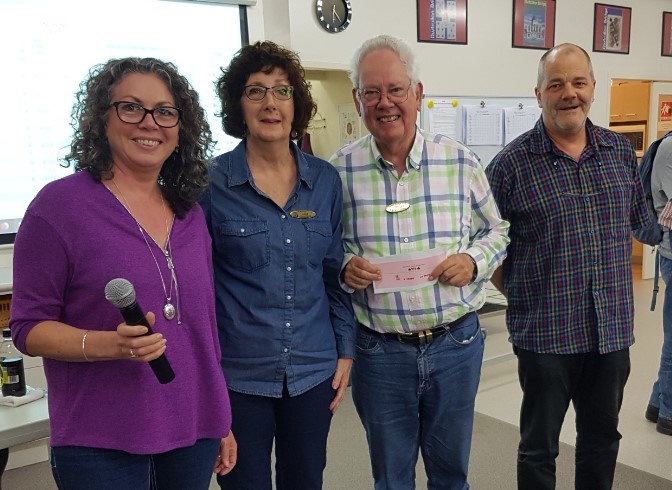 Our August Teams Congress attracted 30 teams from all over and was won by the Richman team from Tasmania and the Gold Coast. Pictured are Sandra Richman, Lou Tillotson, Roger Weathered and Andrew Richman. Runners up were the Stacey team (Beverley Stacey - Alison Dawson - Richard Trollope - Richard Perry), and 3rd were the Stoneman team (Michael Stoneman - Val Roland - Marcel Hoevenaars - Mattie Baljet).

Many thanks to the members who help in the kitchen under the management of Sonia, and with those helping with caddyng, directing, dealing and entries. [posted Sun 4-Aug-19]

The 2019 Teams Championship was played over three Thursdays in July and 16 teams competed in full round robin. 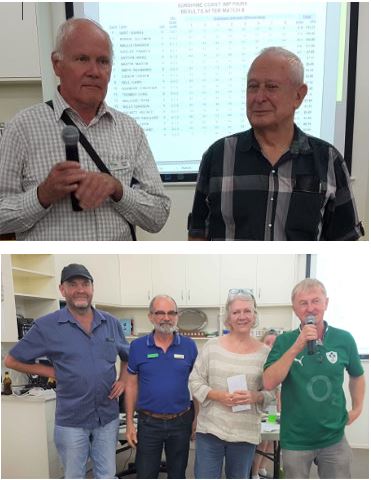 We held a walk-in pairs session as a prelude on Friday afternoon. This was won by Neville Francis / Pat Bugler.

The Teams event on Sunday was won by the Bardon team which was made up of Jim Wallis and Toni Bardon who were attending their 31st consecutive Sunshine Coast June Congress, along with team-mates Neville Francis and Pat Bugler. Jim, Toni and Pat are pictures at bottom left, with club president Brian. The Category B prize went to the Avunduk team and the Scott team received an encouragement award.

Many thanks to Ursula as congress convenor and caddy Trish, and last but definitely not least to Moira and her helpers in the kitchen. See more... [posted Sat 15-Jun-19]