Friday mini-lectures starting soon: We will soon be commencing mini-lectures on Friday mornings between 8.15 and 8.45. There will be a diversified range of topics and a pool of speakers. Content will include conventions, bidding tips, and declarer and defender play.

Bits and Bobs - an occasional column: Here is A Winter Poser, the latest in the the Bits and Bobs series. The sparkling wine prize from last week's column wasn't awarded, so the "bubbly" will be awarded to the first member who identifies the mistake made in the article published last Friday "Lies, Damn Lies and Statistics". More...
Charity Day Friday 19 August: Join in on the fun with our Charity Day on Friday 19 August, to raise money for our local, increasing homeless community. Bridge in the morning (it's a red points day) and we are hoping that members will bridge something to share for morning tea. More...
Double vax requirement now lifted: The ABF and QBA have recently removed the requirement that participants in ABF/QBA events require double-vaccination. At today's Committee Meeting, it was decided that we would follow their lead for our Club sessions, and allow all players into our sessions, regardless of their vax status.
Tenth edition - Rubens Pearls on Hand Evaluation - for our advancing players : This is the tenth and final edition in the series "Rubens Pearls on Hand Evaluation". Click for more details... More... 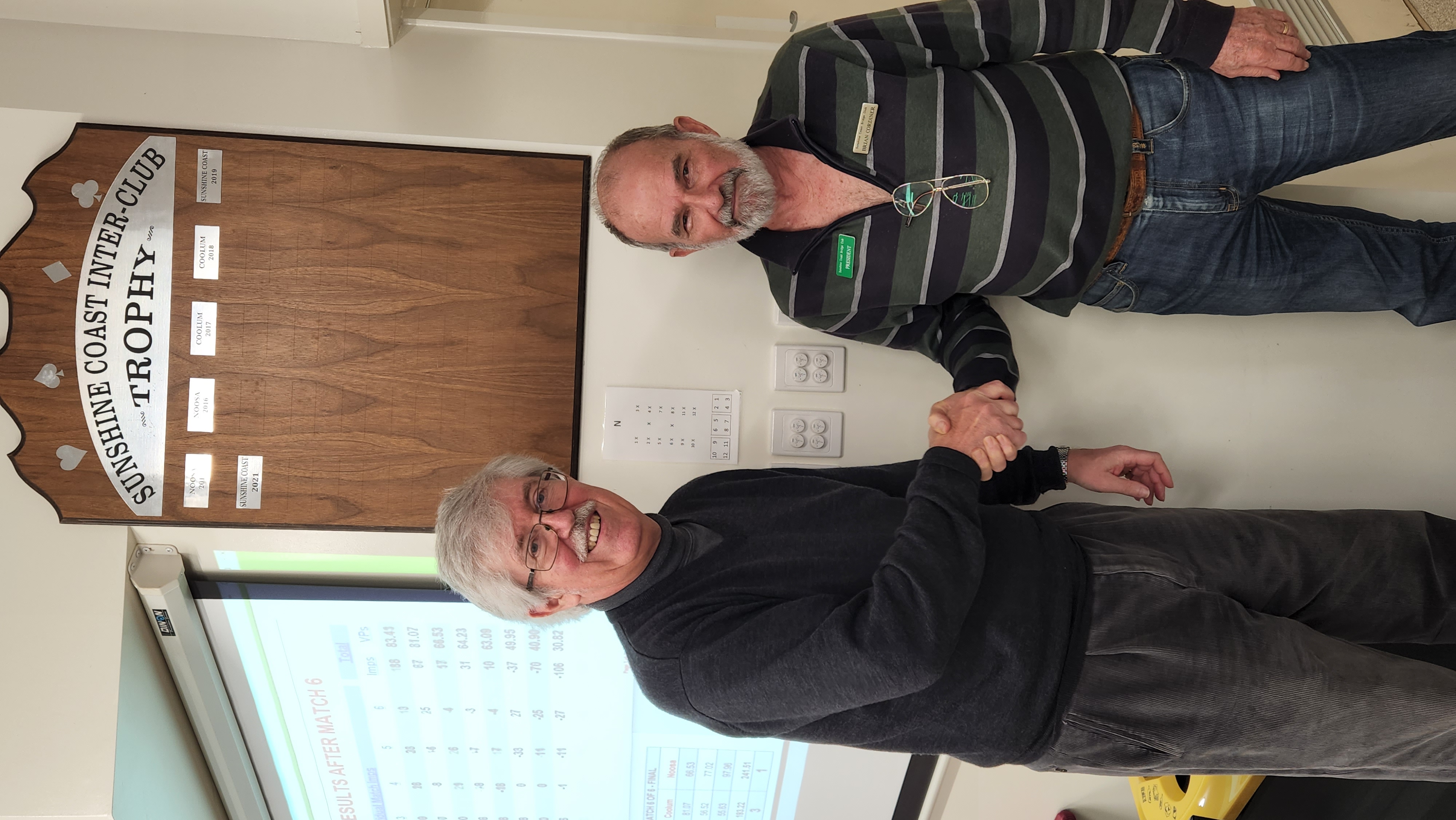 The Interclub Teams Championship was held held on Saturday 30 July 2022. 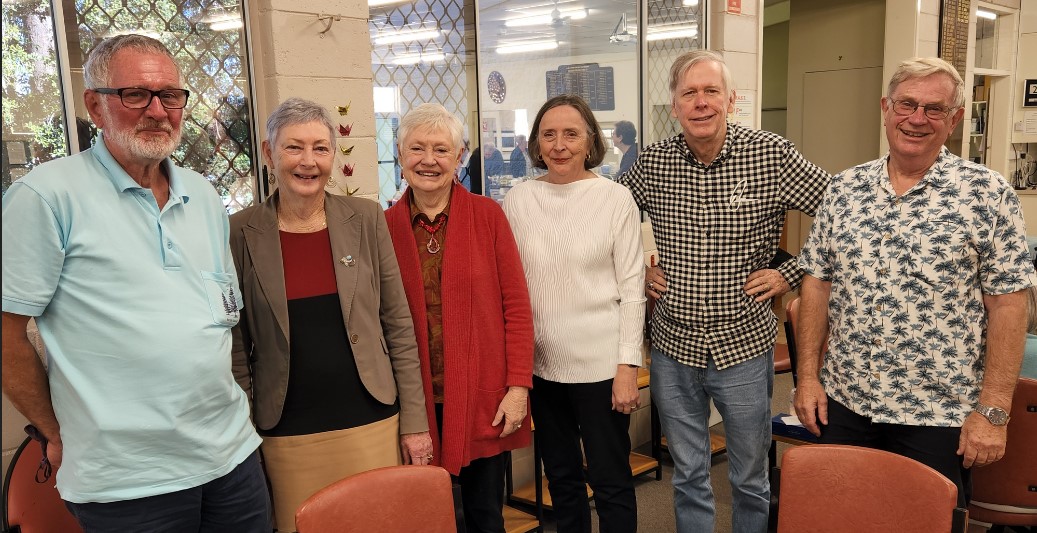 The 2022 Teams Championship was contested over three Thursdays in July and 15 teams competed in an all-play-all event. 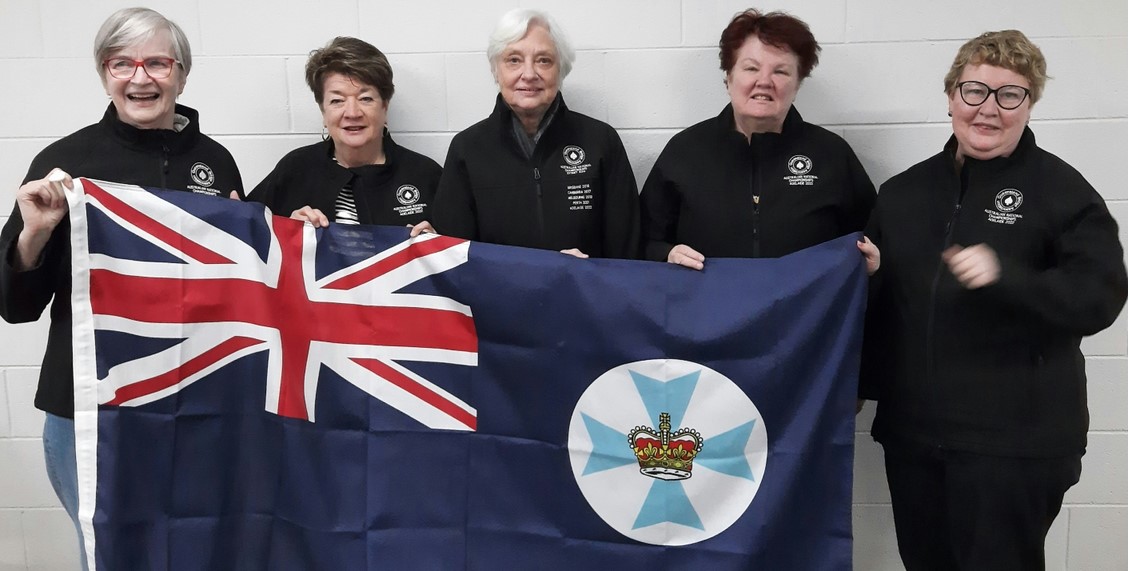 Two of our club members, Gabrielle Elich and Fay Stanton, were part of the 6 person Queensland Women's Teams competing at the Australian National Championship in July in Adelaide (pictured left in the team photo). The team played against the other state Women's teams in a grueling contest that lasts a week. Unfortunately victory eluded the Queensland team this year.

The ANC is an annual event held in a different State every year, and each State and Territory sends a 6-person team in each of the Women's, Seniors, Open and Youth divisions. [posted Sun 26-Jun-22] 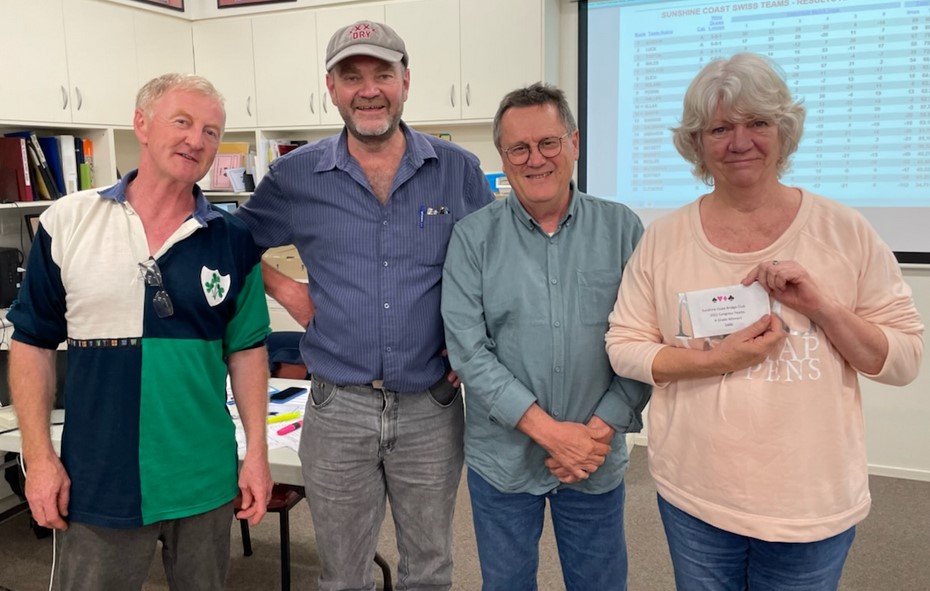 We held a walk-in pairs session as a prelude on Friday afternoon. This was won by Pepe Schwegler - Carmel Dwan, with runners-up Neville Francis - Patrick Bugler.

The Teams event on Sunday was won by the Bardon team. The team was made up of Jim Wallis and Toni Bardon who were attending their 33rd consecutive Sunshine Coast June Congress, along with team-mates Neville Francis and Pat Bugler (three-quarters of the team pictured at right with Steve Weil from sponsors TBIB). This team also won last year's Teams. The Category B prize went to the Allan team.

Many thanks to director Peter, congress convenor Trish and Julie, the caddies and other helpers, and sponsors TBIB Insurance Brokers. See more... [posted Sun 19-Jun-22] 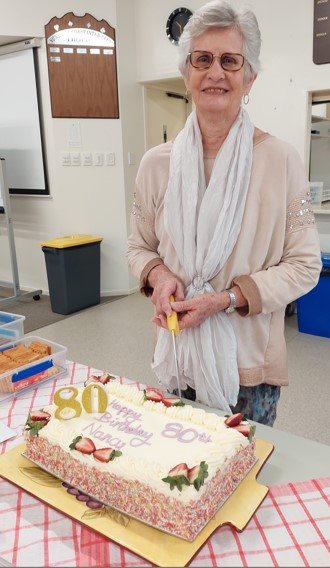 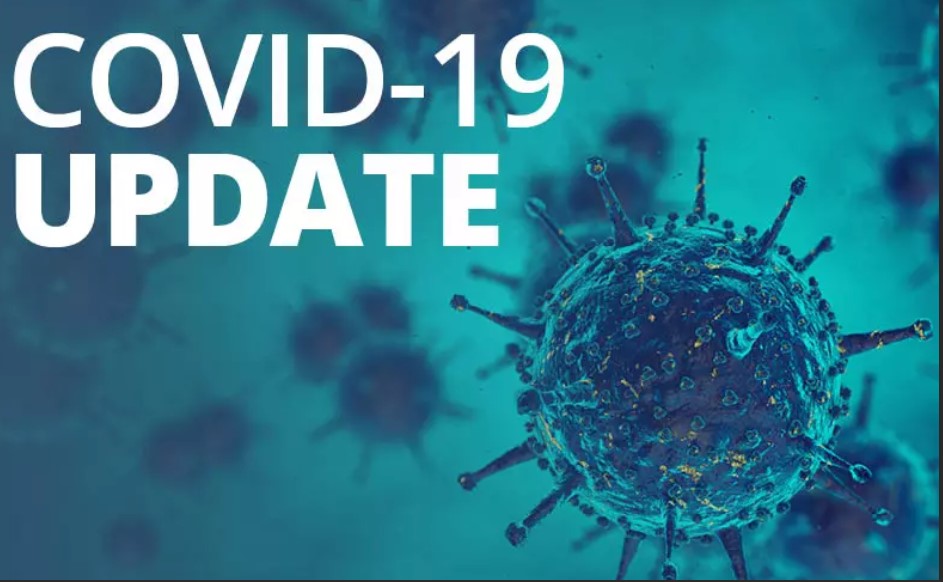 At today's SCBC Committee Meeting, it was decided that, effective 15 June 2022, we would follow the lead of the QBA and ABF, and allow all players into our Club sessions, regardless of their vax status.

Face masks: Face masks are not required, but players may still choose to wear them if they wish.

People showing symptoms: Players should not attend the clubhouse if they have Covid19-like or flu-like symptoms. The director may ask players who appear unwell to leave. [posted Wed 15-Jun-22] 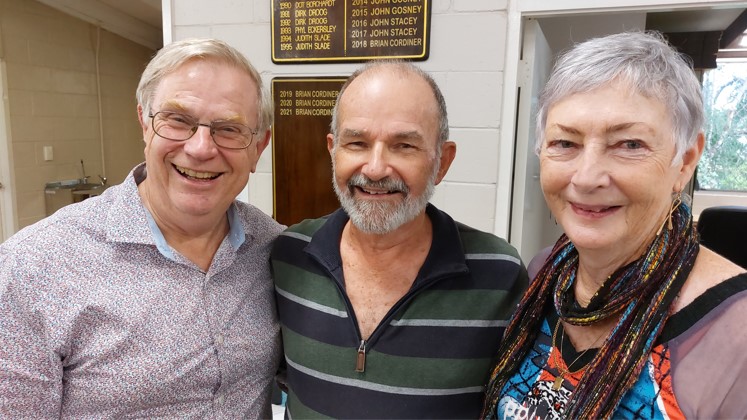 The 2022 Pairs Championship was run as 2 Qualifying sessions and 2 Barometer Final sessions, and attracted 24 pairs. This event was played over 4 Monday afternoons.

The 2022 Novice Pairs Championship was held in April, with 18 pairs contending. An all-play-all barometer was held over 3 weeks, ably run by Steve Murray.

This is an honour board event,and is run annually. Red masterpoints were awarded. See more... [posted Wed 4-May-22]

Club members Fay Stanton and Gabrielle Elich played in the trials for the Qld Women's Team over the last two weekends, and finished 2nd which means they will represent Queensland as part of a team of six in the Australian National Championships in Adelaide later this year. Gabrielle and Fay ranked towards the top of the field for the entire event.

There were a number of Sunshine Coast players in the field, and club teacher Alison Dawson playing with Liz Zeller finished a commendable fifth. 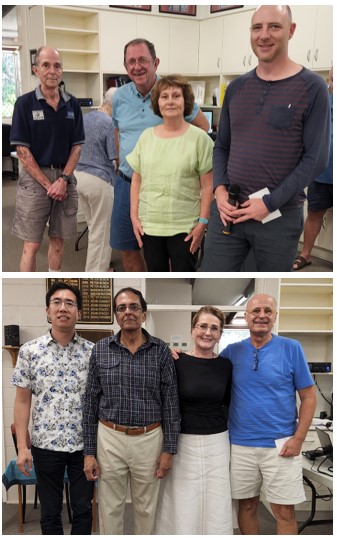 The 2022 Graded Teams was hosted by our club on 20 March. We had 26 teams playing in 2 grades, with players from all over south-east Queensland.

Many thanks to convenor Ursula, caddies Mary-Anne and Marion, director Peter, and Sonia and the other kitchen and bar helpers. See more... [posted Mon 21-Mar-22] 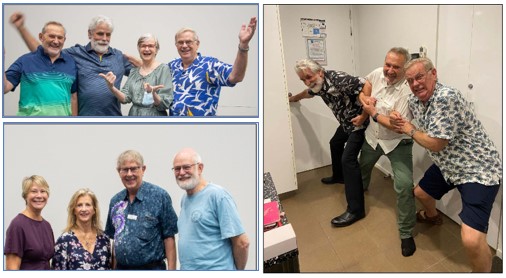 Debra Neisler and Dawn George (pictured at right with their team mates)also shone by finishing 2nd in the Novice Teams Championship.

Other notable achievements include John Stacy's 3rd place in the Seres-McMahon Matchpoint Swiss Pairs, Ken Dawson's 4th place in the Ivy Dahler Butler Open Swiss Pairs and a special mention of Gary Pettersen and Carmel Dwan who finished 8th in the comparatively strong Ivy Dahler Under 300 Masterpoints Butler Swiss Pairs after leading the field at the overnight break.

Winning the Intermediate Teams wasn't the only memorable occurrence at the Gold Coast for David and Gabrielle - after lunch on the first day of the teams, David and the other team members found themselves locked in their apartment. After a visit from the fire department they eventually made it back to the venue, missing just one match. Gabrielle played that match with 3 substitutes.

Numbers at the Gold Coast Congress were significantly down on recent years, as a result of the Omicrom outbreak. Entries were looking positive in December, but then as Omicron took hold, hundreds of players cancelled their entries. GCC 2022 will end up running at a significant loss. To defray some of the losses, the ABF has approved some on-line gold point events, with proceeds going to the QBA. The first of these is a one day Swiss Butler Pairs and one day Swiss Teams over the weekend of 5-6 March 2022. Enter via MyABF. [posted Sat 26-Feb-22] 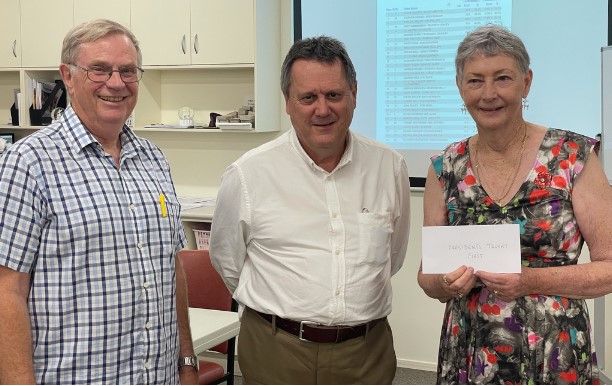 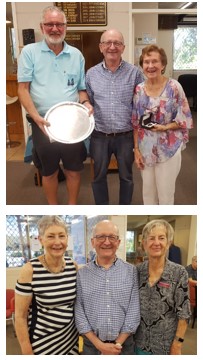 Our club hosted the Qld Senior Pairs on Sunday 14 November. This was the first time this event has been hosted at SCCBC.

There were 32 pairs from all over south east Queensland in a strong field.

The B Grade was won by Ross Shardlow / Peter Gruythuysen.

Thanks to director Peter, convenor Tricia, and the caddies, kitchen and bar help, and dealer. [posted Sun 14-Nov-21]

Our 2021 Novice Pairs Congress was held on 4 October with 16 pairs from all over south-east Queensland contending. Winners (pictured top right) were Melva Leal and Midge Spice, from Recliffe.

Club members Kim and Lesley Rouse (lower right) were the best finishing pair from our club, and win the Mary Murray Shield for Novices.

Many thanks to Steve as director, Tricia as organiser, and the team of volunteers in the kitchen and bar. See more... [posted Sun 3-Oct-21] 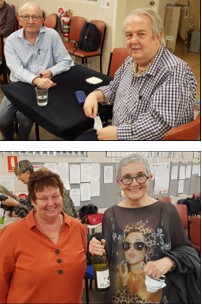 Our 2021 Graded Pairs congress attracted 21 tables, with players from across the Coast and from Brisbane.

We had 2 separate grades, and this is a popular format for players at all levels of experience. Winners of the A Grade (pictured top right) were Richard Ward and Tony Hutton, and B grade winners (lower right) were Glenda Vincent and Kate Balmanno.

Many thanks to Peter as director, Sam and Mary-Anne as caddies, and Tricia as convenor. 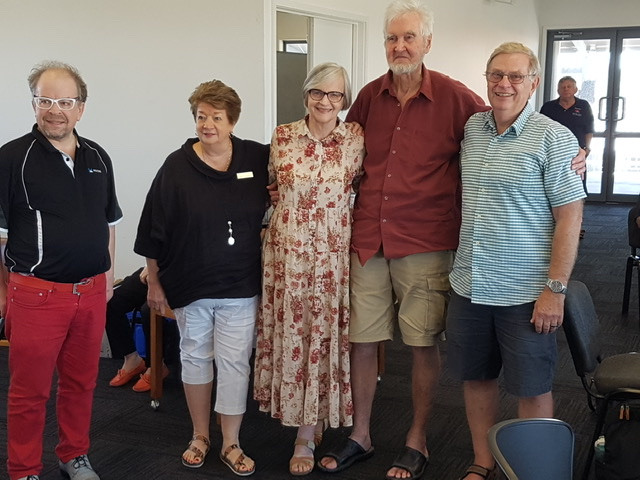 A Sunshine Coast team playing in the Barrier Reef Congress in Mackay last weekend won the Open Teams, competing in a strong field of players from all over Australia.

This event is held annually in Cairns,Townsville, Mackay or Yeppoon and is one of the two gold Masterpoint events in Queensland. [posted Mon 3-May-21]